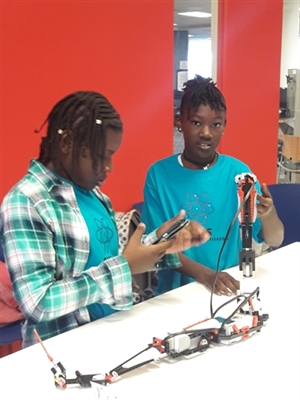 The Robotics Camp for Girls, which was held in the Harry C. Moore Library at the University of The Bahamas, teaches young girls, 10 to 16, how to build robots.

Girls from both public and private schools took part in the camp. Organizers say they were intentional in finding a good mix of girls “benefit from equality and equity.”

Stacy Moultrie, a scientist and environmentalist conceptualized the Robotics Camp after realizing that there was little representation in STEM fields in The Bahamas, so she created the camp to get girls interested in math and science from a young age.

Patrina Farquharson, a volunteer said the camp is timely and needed.

“Studies have shown that little girls, particularly primary school girls are very interested in science and math and as they grow up they kind of veer away from it. Most of it is because of misogynistic and sexist teachings that they learn from family or even society that says, ‘oh, you like math, that’s not a girl’s job’ and things like that,” said Mrs. Farquharson.

“There are acceptable math jobs that girls do, which are accounting, bookkeeping, [working as] cashiers and things like that. But, when you say engineer very few people associate that with girls. It has to do with peer pressure. I find that we have a country here that loves mediocrity and we ostracize children – girls and boys – who are smart or show that they like math and science and I think that’s part of the problem is that when you’re shamed, you start to develop defensive techniques to fit in because as a child it’s very important to fit in.”

Camp volunteers also give the girls self-improvement lectures to expose them to different life areas that may impact them.

“We wanted to make sure we had a small enough group where everyone would get a good experience and also we had to buy the robots. The robot kits are over $300 each and they make three different kinds of robots, but that initial investment we had very generous sponsors, one of whom was [Sunshine Insurance]. That to me is such effective donation because we can never take that away from the girls. They will always know that I can fix something and I can make it work,” said Mrs. Farquharson.

Aryelle Forbes, 11, a seventh grade Bahamas Academy student who said she wants to be either an engineer or a chef, said she signed up for the camp because it seemed like a “fun and great way” to meet people.

“I’m really shy, so I loved that this was a great opportunity to make new friends. I’m enjoying learning how to build robots. I like science. My mom was a science teacher. I also like learning about mangroves. It’s just a good experience,” she said.

Isabelle Moultrie, 12, of St. Andrew’s School said it was “great” to see so many girls involved.

“I thought it was really cool that a bunch of girls were doing something that you’d mostly see mostly boys doing. So, I decided to stay for the rest of the camp just to see how the robots worked and how they got better in the competition, obviously, which is going to be pretty exciting,” she said.

Moultrie, who says she is great at science and math said when she is finished with school she hopes to work in design or art.